Guidelines for Use of the Interactive Digital Maps 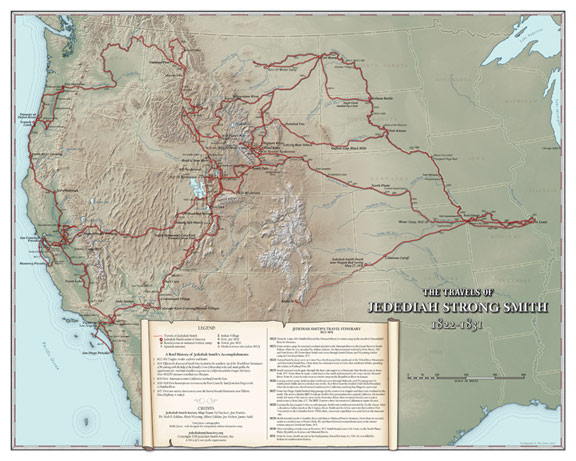 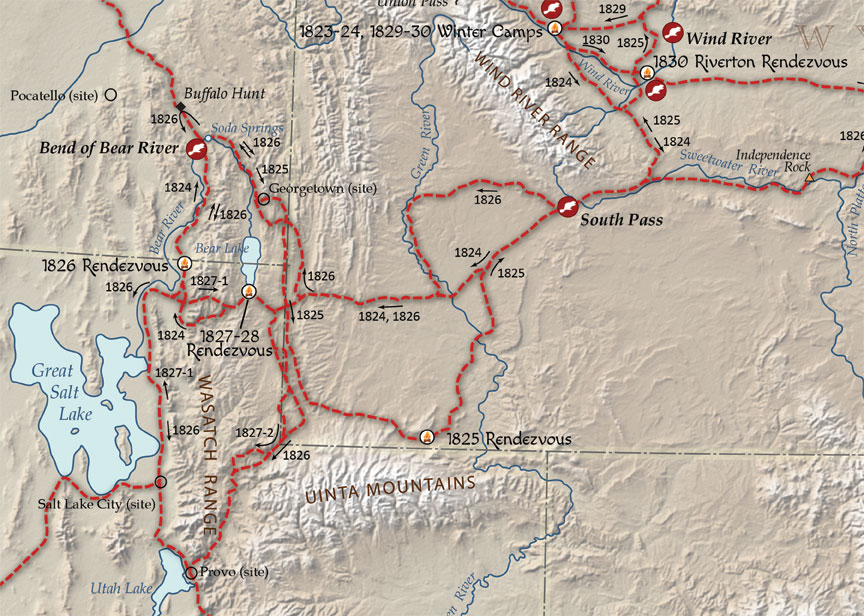 Enlarged example of a regionalized view.

Read the Introduction to the Map

How to Use the Maps

The maps were drawn by Jedediah Smith Society Map experts and historians who have researched the routes and travelled much of the area Smith journeyed. The maps are based on the primary source journals, historic maps, and other publications which are referenced at the end of this guideline. It is broken into the following areas:

1. When you open the desired interactive map, you will see one or more overview maps of a portion of Jedediah Smith’s travels, divided by location and date.

You may zoom in and out on the overview maps with the (+) and (–) boxes in the corner or just hold the Ctrl key and roll the scroll wheel on your mouse.

The map may be clicked and dragged to move around while zoomed in. Note: On some trail maps that cover a very large area, the trail overview may not be apparent in the initial overview. In that case, zoom out (–) until the trail becomes visible.

2. To view the map full screen, click the “View Full-Size Route” button below the overview map. The map will open in a new tab in your browser.

3. Beaver Icons mark points of interest on the trail. Click on this icon to display a brief summary of the location. It may also include a photograph. Double clicking on the picture will give you a full screen view of that photo plus give you the opportunity to view a second photo if such a photo is present.

4. Directional arrows indicate the direction of travel on the current path. Star symbols indicate which maps show Smith’s travels immediately before and after the current map.

5. When done viewing a full-screen map, simply close its browser tab by clicking the (x) on the tab at top.

These maps are drawn to the best knowledge we have at present.

There are only 2 surviving portions of Jedediah Smith’s journals which detail the Southwest portion up to the Umpqua in Oregon. Other journals and maps, and references have been used to document the lines. Even with the journals, the lines you will see are an interpretation from careful studies of the manuscripts, books, maps, journals, topography and satellite data. Members of the Jedediah Smith Society have personally followed most of these routes on the ground to verify their agreement with the available data.

Feel free to leave a comment on the space provided at right if you have a question or suggestion. Please leave 15 days for a response. Your email will not show on the web site.

The following major references have been consulted to make this map and also may be used for further research:

6. McLeod, Alex R. Journal of the Southern Expedition. Two portions of his Journals which cover the period of September 6 to December 10, 1828, included in Sullivan

4. Wheat Carl, & Dale Morgan 1954. Jedediah Smith, and His Maps of the American West. Includes, Brue, Burr and Gibbs maps. These maps are published in the book. A folded copy of the two maps is placed in an envelope on the back inside cover of his book.

5. Morgan, Dale L. 1953. Jedediah Smith and the Opening of the West. Includes a map entitled The Travels of Jedediah Smith in the West 1822-1831. Drawn by Dale Morgan.